Since 1998, the Owner-Operator Independent Drivers Association Foundation, Inc. (OOFI), a 501(c)(3) non-profit with a mission to conduct research concerning economic and safety issues affecting the motor carrier industry, has performed yearly surveys of its membership not only to understand the profile and demographics of its members, but also to document the changes that are occurring in the trucking industry, including the requirement for truck drivers to visit a CME.

Recently, OOFI gathered information from OOIDA members concerning the new medical exam in order to evaluate and assess the impacts that the National Registry is having on small business owners and professional truck drivers.  Although the NRCME had only been in effect for a few months, more than a thousand members had already been required to go to a CME for their Department of Transportation (DOT) physical since initial date, May 21.

The survey data verified OOIDA’s concerns that the NRCME would create issues such as forcing drivers to visit a different doctor, increased costs for exams, and additional tests.  Half of the respondents indicated that they were required to change doctors because of their previous physician was not a CME.  Further, several drivers were unable to set an appointment with the first CME they contacted because the CME was not accepting appointments.

In response to the issues of longer wait times for appointments, greater travel distance and increased costs of exams, FMCSA noted that they “considered the impact of the rulemaking on small businesses and drivers.” FMCSA acknowledged that they are relying on the private sector when it comes to issues about fair market prices.  However, the majority of respondents stated that the new DOT exam was more was expensive with the average price approximately $100.  Furthermore, many individuals were asked to take additional tests that were not required in previous years such as sleep apnea testing, balance tests, and even a prostate exam.  The cost of the additional tests was over $1,000. 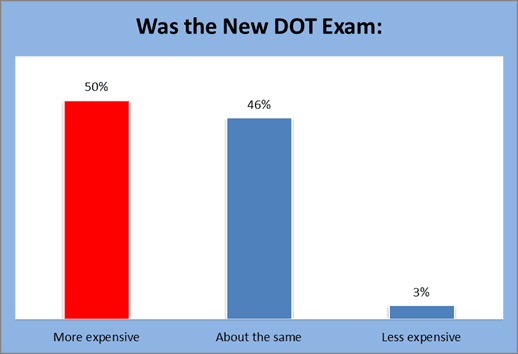 Moreover, 47% of those drivers that received a 3-month medical certificate in order to complete the additional tests were charged for another DOT exam after they returned.  A vast majority of respondents received a new medical certificate, with most receiving either a one year or two year card. 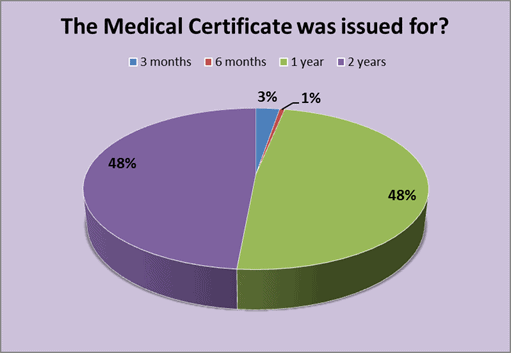 In addition, many drivers indicated that they had difficulty finding adequate parking for their truck.  Other issues discovered during the survey included the CME asking for tests that are not required in the FMCSRs.  One member indicated that she failed her exam because she could not grip 80 lbs. even though the FMCSA Medical Examiners handbook states that there are no such guidelines in the regulations.  Another member was told by the CME that he must have 2 pairs of eye glasses, however, there are no regulations addressing this issue. Moreover, one member, who has always been issued a 2-year certificate, was granted only a 1-year card because of their prescribed medications even though he had been taking the medications for years and there were no guidelines concerning the prescription. 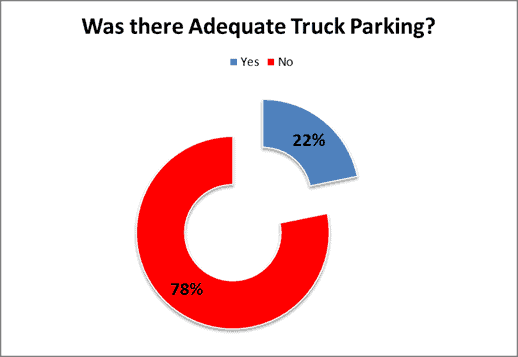 Overall, the survey helped bring to light additional concerns of OOIDA, including certain medical facilities such as Concentra, which has a financial interest in sleep apnea testing, demanding drivers take a polysomnogram before issuing a medical certificate.  The data collected also demonstrated the need for both improved and more consistent training for CME’s.